This deal is in category Flipkart and was Last Updated on: March 6th, 2015
0 Comments
August 13, 2014 / Latest Discount Coupon Codes 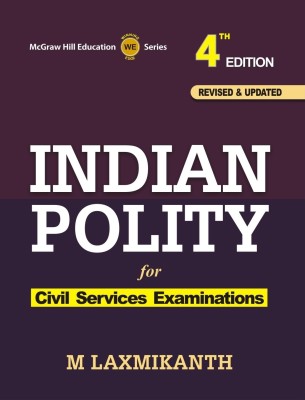 Important points to get on 40% Discount on Indian Polity

Published in the year 2013, Indian Polity For Civil Services Examinations is a book that provides the readers with insight into important topics that need to be understood by students to clear the civil services examination.

Summary Of The Book

Indian Polity For Civil Services Examinations has been designed to meet the requirements of students preparing for civil service examinations. This book covers the entire syllabus, which civil service aspirants need to understand.

The first part of the book deals with the historical background of the constitution, and throws light on fundamental rights, fundamental duties, citizenship, and features of the constitution. The second part deals with the parliamentary system, emergency provisions, special provision for certain states, inter-state relations, and the current status of Jammu & Kashmir. The third part provides insight into the central government by explaining the roles of the President, Prime Minister, and Vice-President. In the fourth part, students are provided detailed information on the state government, explaining the role of the Chief Minister, Governor, state council of ministers, subordinate courts, and high court.

In the fifth part, the readers are provided insight into the Panchayati Raj as well as urban local governments. The sixth part deals with union territories, and scheduled, and tribal areas. In the seventh part, the author throws light on the constitutional bodies, which include the finance commission, election commission, advocate general of the state, special officer for linguistic minorities, national commission for SCs, national commission for STs, and union public service commission.

In this third edition, the author also provides 7 appendices at the end of the book. The appendices cover topics such as table of precedence, definitions under the constitution, constitutional amendments at a glance, subjects of union, state, and concurrent lists, articles of the constitution, and ministries/departments of the central government. This edition of Indian Polity For Civil Services also comes with updated UPSC preliminary, and main question papers as well.

M. Laxmikanth is an author, and trainer.

Laxmikanth completed his master’s degree from Osmania University in 1989. Following that, he started his own coaching academy, Laxmikanth’s IAS. Laxmikanth has a great deal of experience coaching civil service aspirants.

2. Making of the Constitution

3. Salient Features of the Constitution

4. Preamble of the Constitution

5. Union and its Territory

10. Amendment of the Constitution

11. Basic Structure of the Constitution

33. Special Provisions for Some States

37. Scheduled and Tribal A reas

45. Comptroller and Auditor General of India

47. Advocate General of the State

61. Rights and Liabilities of the Government

62. Authoritative Text of the Constitution in Hindi L anguage

Part XI
Working of the Constitution

71. National Commission to Review the Working of the Constitution